The Woman in the Picture

I’ve been away from my little magic castle for a bit; I’ve been tending to some real-world problems, as well as allowing my body to get some much-needed rest. 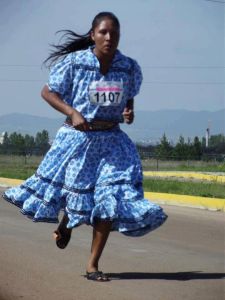 I logged into Facebook this morning and discovered, courtesy my friend and CineLadies founder Marisilda Garcia, this wonderful picture, which you now see on the left side of this paragraph. The picture – and the article translation found with it – tells the story of an indigenous woman of the Tarahumara. The woman is seen running in a half-marathon, which she not only won, but broke several records in the process, all of this without professional training, without athletic clothing – including running shoes – and without the endorsements of Nike, Mountain Dew, Monster, or whatever company is trying to get their brand stamped across every square inch of earth. She won it – and she won it on her own.

And now, for the awkward segue into how this picture relates to the entertainment business. People often speak of their careers as if they were a race. Everyone’s out to be the first, get the biggest headlines in Variety, sign the biggest deal ever, smash all box office records to smithereens.

However, your career is not a race, dear ladies and lords of the court. Your career is a marathon, and it’s one you run endlessly, hours into days, into weeks, into months, into years, and so on. You simply place one foot in front of the other, and so on, and so on. And you never stop.

Print out a picture of this woman, and hang it on your wall. Print out another picture, and put it in your purse, your wallet, your satchel – wherever you can always have it at hand. When those times hit – the holidays that seem so merry for everyone but you, the flood of shame that comes with a rejection letter, or that whisper of envy when someone you know hits it huge – do this one thing. Pull out the picture, look at the woman, and remember her story. How she broke all records, how she became an internet sensation, and how she, despite all odds, won that race… and remember that she was able to do all of this, because she didn’t stop.

Screenwriter. Creator of things. I love tacos. "Midlife on Fire" Volumes 1 & 2 now available at Amazon.com.
View all posts by princessscribe →
This entry was posted in Advice to The Writer and tagged CineLadies, Hollywood, marathon, Screenwriting, writing. Bookmark the permalink.

2 Responses to The Woman in the Picture