The Stranger on the Platform 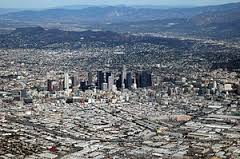 Life in Los Angeles can drive one mad. The hustle and bustle, the noise, the confusion… add to that the insanity of the entertainment business, and you have a mix that is guaranteed to bring the most stoic of people to their knees.

One of my coping mechanisms is to get out – not out of L.A., but into it. I find hidden treasures everywhere. And so, the plan today was to explore: an architectural jaunt to Hollyhock House, then a Metro trip to the Gamble House.

As the train pulled into the 7th Street Station, it jerked and slowed, then stopped. There was a great commotion outside. People were yelling and pointing. The lights went off in the train; the airflow stopped. Moments later, L.A. County Sheriffs swarmed through, ordering people off the train. We exited, confused. A man pointed. I turned and saw one of the Sheriffs on his knees. He held a flashlight, and was peering under our car. A man was under there. He had jumped in front of our train.

Within a few minutes, the place was evacuated as emergency personnel descended to carry out what could only be described as a grisly mission. We were with the people who had tried to prevent the man from jumping; apparently, he threatened to do so in a joking manner, making several false starts before he most determinedly flung himself in front of the tons of steel barreling towards him. No one knew him; some said he was 40, others claimed he was 20. The truth will come out by the end of the day, once the local media prioritizes the importance of their newsfeed… but what is known is that he is dead.

I was in shock; not 15 minutes before, I had been talking about a story that I am working on, strangers coming in contact with one another, a tale of urban life. One character – a young man – had traveled to the train station. He had gone there to commit suicide – by jumping in front of a train.

We were led upstairs and pushed out onto the street, only to land in the middle of a Hollywood blockbuster filming a great action and adventure sequence. Helicopters were everywhere – police, media, and the ones that were filming. It was chaos. The trip to the Gamble House was off, as train service was suspended, and the desire to go there had diminished. I spent the next few hours wandering around the Theatre District and Pershing Square, as my mind returned again and again to the event. Eventually, the Metro declared the situation resolved, and the trains resumed their schedules, with a few minor delays.

The return to 7th Street. It was so very quiet. There were neither police nor emergency responders; the platform was all but empty. As I waited for the train, something caught my eye. It took a few moments to register, but suddenly, I realized that I was standing in the precise spot where, just a few hours ago, that desperate soul had taken his life. That man’s entire existence – all he was, all he would ever be – was reduced to three sad objects – a coroner’s glove, a pair of tennis shoes, and a pool of dried blood.

I keep wondering about that man. Who was he? He was somebody’s son, that is for certain, and at one time or another, he had been somebody’s friend, somebody’s lover. What happened to him, what despair so consumed him that he felt this action was the only one he could take? And… where were his angels? Where were those voices, those soft whispers, telling him to stop, reassuring him, telling him to breathe, that everything would be alright? What had left him so bereft and alone? Why had his angels, that grace within humans that stops them from committing the unthinkable, abandoned him? And, so, I think about Caim, and Father Buer, of Lillith, Lucien, and Beliala, and of their falls from grace. I think of the guardian angels in my life, and realize how grateful I am for them… and I wish fervently that, for just one second, they had left me, to give comfort to another.

#Filmmaker. Living with #Cancer. #Animal lover and foodie.
View all posts by princessscribe →
This entry was posted in Today's Blog, Uncategorized and tagged Angels, Hollywood, Los Angeles Metro, suicide, They Live Among Us, writing. Bookmark the permalink.