In the Trenches – Writing on Scripts With Boys

Posted on August 1, 2012 by princessscribe 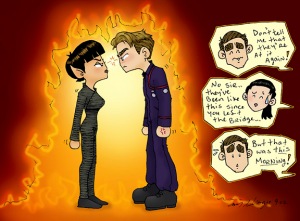 It’s one thing to pen a project, to come up with the concept, beat it out, nurture it, feed it, mangle it with precision, beat it some more, gnash one’s teeth, procrastinate, talk about it a lot, write some more, and eventually end up with what you hope is a script.

It is quite a different thing to do this with a partner. Especially when your partner is a guy.

Last December, I was presented with a unique opportunity after coming up with a hare-brained idea that involved an actor that I knew, one I had met during the creation of They Live Among Us. An idea for an adventure/reality show came to me, and within a couple of months, the two of us had created a gonzo pitch presentation. Said show is now off to market, safe in the hands of third-party.

Flash forward. It’s August 1, and, since the inception of the aforementioned project, we now have one pilot with a full season breakdown, a couple of short scripts and are going into production with our Sci-Fi pilot, INTERGLOBAL TRADING FUND.

A year ago, I was rewriting (again), a little indie drama about a man and a pumpkin. These days, I’m writing about time-travel, rednecks, fast cars, fallen angels, reality tv and gargoyles. It’s pretty wicked fun.

A good writing partnership is a marriage of sorts. There is a lot of give and take. You each bring something to the table. Both partners carry the load. There is a common goal and vision. There is trust and respect. And, like marriage, it takes work. A lot of it. You have to learn to listen to one another.

The other night, we were working on tweaks for ITF. Very minor tweaks. Eventually, we found ourselves going over one scene between XIII and Howard. It’s a brief scene, but a crucial one. Ten lines. Over and out.

My eye scanned down the page. I didn’t like the ending line. It felt like a throwaway… which it was.

G’s voice sounded over the phone. “I agree.”

“Hmmmmm,” I made various humming noises, and little sing-song chirps as I read the scene again. “Here. This line needs to be at the end.”

“Howard’s. ‘This requires a delicate touch.’ It’s a perfect cap.” I replied.

“It needs to stay there.”

We’re both pretty stubborn. Not in a ridiculous way… we both stand our ground when we think we are right. Stare each other in the eye, and wait for the other to blink. He’s former military; I’m sass from Oklahoma. Polar opposites. It’s a lethal combination.

“Stand all you want, but I’m moving it right….”

“…now….” I knew he could hear the click-click of the keyboard as I got my way.

“…just listen to me for a minute?”

G asked, “Why does Howard call XIII in?”

“Because for Howard, everything rides on this jump. It’s crucial for him. His world hangs in the balance,” I replied, rolling my eyes.

I went on. “So XIII is the only operative who Howard places absolute faith in. He’s the one that takes on the most challenging transactions.”

G interjected. “Right. So, when XIII questions ‘two jumps in one day’ Howard answers him with that line as a kind of affirmation of XIII’s skills. It also informs the audience just how good XIII is, and why HE has to be the one to complete this transaction, right?”

“Hello? You still there?” G asked.

I blew out my breath with a Pfffft. Shit.

We continued on, talked about a couple of tweaks post table read, and hung up.

Why did I back down? Well, I made a huge gesture of self-sacrifice… but G knows me better than that. I backed down, because I discovered that he was right.

Give and take. Speak and listen. Check the ego at the door. Have fun. That’s what a great writing partnership is all about. Besides, I get to write action scenes. How cool is that?

Check out my interview with Adelaide Screenwriter

10 Responses to In the Trenches – Writing on Scripts With Boys