Things That Go Bump In the Night

Posted on October 24, 2011 by princessscribe

It’s that time of the year again…

No live organism can continue for long to exist sanely under conditions of absolute reality; even larks and katydids are supposed by some to dream. Hill House, not sane, 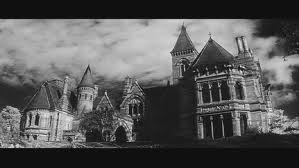 stood by itself against its hills, holding darkness within; it had stood so for eighty years and might for eighty more. Within, walls continued upright, bricks met neatly, floors were firm, and doors were sensibly shut; silence lay steadily against the wood and stone of Hill House, and whatever walked there, walked alone.

Thus begins one of the most masterful ghost stories of all time, Shirley Jackson’s The Haunting of Hill House. Halloween is upon us, “Oooooh, scaaaaary, kids!” as Count Floyd would say, which prompts me to rattle on about one of my favorite horror archetypes, that of the Haunted House.

Here. Take my hand. We’ll walk together, this night, and, as we do, I’ll whisper in your ear. It’s lovely to be with you again. In the dark. Alone. We are alone… aren’t we?

Screenplay by Nelson Gidding; adapted from the novel by Shirley Jackson

The Haunting is one of those sadly rare films that few storytellers craft these days – a ghost story in which we never see the ghost. There are, of course, plenty of nail-biting moments: doors which swing open and shut, cold spots in which ones breath suddenly appears, wooden carvings that become masks of rage, messages of “Help Eleanor come home” appearing on the walls (“it knows my name!” Eleanor cries), moanings, mutterings and things that go boom in the night, statues that move just out of the periphery of sight, the horrifying realization of just what Hugh Crain was doing to and with his little girls and, of course, the terrifying moment in which the door to library breathes.

The Haunting is the ghost story as great film literature, sculpted from magnificent source material. Flawlessly cast, the film is chock-full of atmosphere – gothic gloom and doom at its paranoid best, Jackson’s dreamlike narrative is blessedly intact. “The Haunting” still frightens the shit out of me.

“In space, no one can hear you scream” is perhaps one of the greatest film poster taglines

I have ever read. I would argue that Alien is indeed a haunted house story; this particular house – the commercial spacecraft Nostromo – just happens to reside in the suburbia of deep space.

Like The Haunting,  Alien relies heavily on tone and the imagination of the viewer; although, in a post-Vietnam era, Scott tosses in enough viscera to make the most stoic moviegoer squirm in his seat and cry out for his momma.

Alien offers great iconic moments: the notorious chest-burster scene, the rising conflict between Ripley and Ash (movie geeks take note of just what is on-screen in Ash’s lab as Ripley arrives to check on Kane’s condition), Lambert’s cries of anguish when she realizes that Dallas is going the wrong way – and her gut wrenching vocalizations as she is being eaten alive, Sigourney Weaver making her debut as Ripley, a most kick-ass final girl, and the alien itself – a Freudian articulation of the vagina dentata. But, ultimately, it is the Nostromo, floating in the silent ethers of space, guided under the tutelage of Mother, that looms foremost in my mind as the principle character. The ship is a cosmic Bad Place, built of corporate greed and corruption, and literally fed by the blood of its crew. The franchise sequels range from great shoot-em-up fun to maddeningly ponderous, but the original draws its power from the masters of cinema who wrote and created it. I’m keeping my fingers crossed for a big screen re-release.

And yes, Stephen King. I’d save the cat, too.

* follow-up – O’Bannon and Shusett received credit for the screenplay; however, the final draft is credited to (title page credit) Walter Hill and David Giler, based on the O’Bannon/Shusett draft. My apologies for the omission.  HRH

Screenplay by Stanley Kubrick and Diane Johnson; adapted from the novel by Stephen King

the thousands – and there you have the Overlook, the nightmarish destination conceived by Stephen King.

Being offered the job of the off-season caretaker of the Overlook seems to be a dream come true for struggling author Jack Torrance and his family. While the Overlook’s employee quarters are a wee bit small and drab, the Torrances have the full run of one of the most luxurious hotels in the world – and all the prime rib they can eat. However, at the Overlook, things come with a price.

Moments of glory: scenes of Jack hard at work on his Great American novel – but Wendy discovers that all work and no play make Jack a dull boy, Jack’s one-sided conversations with the otherworldly barkeeper, the woman-turned-corpse in the bathroom, Kubrick’s tracking shots of Danny as he pedals throughout the Overlook, the little boy’s Big Wheels clacking, going silent and clacking once again… the tsunami of blood and other visions that plague that same prescient child,  and the sense of Wendy’s worry turning to frustration, then dread, and, finally, naked terror.

We discover that Very Bad Things happened at the Overlook – apparitions pepper the place: creepy, blood-soaked twins, parties that appear out of nowhere, the incongruous sexual creep show of two men in a hotel room – one sporting a dog suit. Insanity makes its inevitable appearance, and Jack is thrown into a downward spiral of homicidal madness. He’s the anti-father, the pater that applies Draconian discipline. “I’m not going to hurt you, ” Jack hisses at his petrified spouse, “I’m just going to bash your brains in.” For Jack Torrance, the Overlook is like another hotel, one where, as the Eagles have said, “You can check out anytime you like. But you can never leave.”

The writers take liberties with the source material, most of them spot on, although I would have loved to have seen them try to execute King’s topiary garden of animals which, like the statues of Hill House, move just as one is looking away from them. That being said, they still manage to capture the eerie poeticism of the book, and, with talent such as Kubrick, Jack Nicholson and Shelly Duvall at the helm, The Shining delivers a nightmarishly potent roller-coaster of a film, featuring a carnivorous dwelling that gleefully feeds upon the hearts, the minds, and the lives of the American family unit.

It also provided fecund ground for the trailer mashup that launched a thousand quips.

Oh, my. Look at the time. The witching hour is almost upon us… and I’ve so many other films to discuss… But, it is late. Take my hand again, and if, as we are walking home, you hear something ahead of us, well, it is most likely the wind, isn’t it? After all, we are alone…

6 Responses to Things That Go Bump In the Night